Please scroll down on the home page to view our COVID-19 message - thank you. 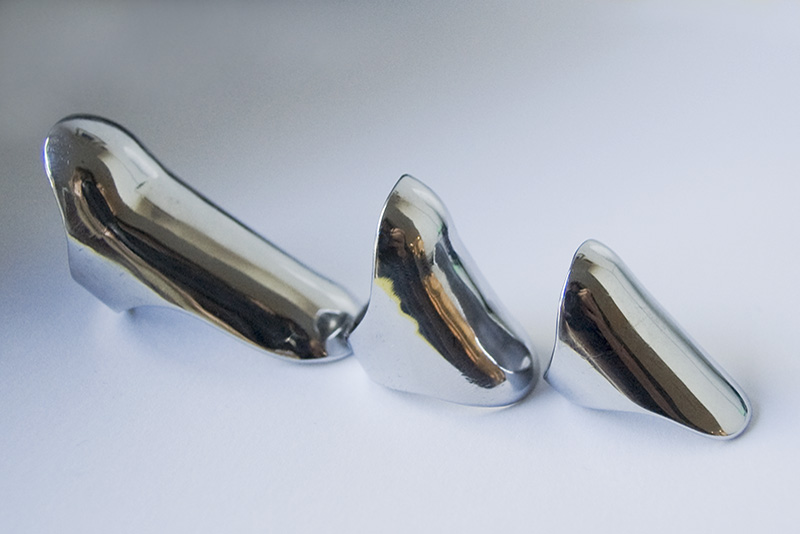 Our youngest son’s kinesiologist made an unusual request a few months ago.

He practices and trains people in something called Neural Organisation Technique. As part of this technique and other protocols, he often works inside his clients’ mouths to help relieve intra cranial pressure and balance out some of the deeper cranial muscles and bones that can only be reached (by touch) through the oral cavity. He said that as Hugh grows more teeth, it’s unlikely he’ll be able to continue working in Hugh’s mouth due to the high risk of being bitten.

After considerable thought and discussion, I suggested to the kinesiologist a few weeks later that Matthew might be able to make him some finger protection. So several weeks later he came to the workshop to be measured up for some finger armour. This was not an entirely new concept for Matthew, as he has made several sets of fully functioning gauntlets over the years. Hugh’s next kinesiology session was booked in for the following week, so Matthew made it a priority to have a prototype ready in that time.

The armour includes three articulating rings for each bone segment in the finger (though only 2 rings are needed for small children). They are made from 316 grade stainless steel and must fit the contours of the individual’s finger perfectly, so this is definitely a custom job. Each ring slots inside the other and can be easily worn throughout the treatment session with a finger glove over the top.

When our kinesiologist used the rings with our son for the first time, he was really blown away by them. No modifications were required (though Matthew thinks we got a bit lucky on this occasion). He could work in Hughy’s mouth for longer periods and more effectively, simply because he didn’t need to be concerned about being bitten. At first he seemed a little nervous about using the rings, but within just a few seconds of working with them, the nerves gave way to excitement and he couldn’t keep the smile off his face! He was happy that he could also leave the armour on while working on other parts of Hugh’s body – an unexpected bonus.

All of the rings have very rounded edges and smooth surfaces, so the client cannot damage his or her teeth or gums on them (the instinct to bite down is there, but the bite is naturally tempered by the hardness of the steel).

Of course, special care needs to be taken when first entering the mouth to ensure the lips are free and don’t get pulled between the teeth and the rings.

Click on the link to view the project portfolio.